What It Is: Los Angeles Ink Stains is an autobiographical webcomic by Jim Mahfood that has been released as a free web comic on his website and was collected into a book and released by Image Comics.

What Makes It Stand Out: Los Angeles Ink Stains is sometimes funny, sometimes heartbreaking, and always honest. Mahfood’s writing appears simple on the surface but is filled with true-to-life emotion. The art, too, seems simple at first glance. Like the writing though, the subtleties are what make it stand out. Mahfood is his own main character and appears in most of the panels. He totally nails facial expressions. They can range from understated to exaggerated, but they always play a large part in the storytelling. Mahfood also uses grey tones and heavy blacks throughout, giving the art a signature that is entirely unique.

Why You Should Care: Los Angeles Ink Stains currently stands at 63 strips, and has been collected  and published by Image Comics. It’s a webcomic by a veteran of the comics industry, who has been around since long before webcomics started to get popular. It’s an interesting read, because it’s the first attempt at digital comics for a creator who has worked in print for almost 20 years. Mahfood’s art alone should be enough to make you care, but his writing is just as good.

A lot of creators of webcomics haven’t broken into the mainstream comics industry yet. You’ve done work for all the major comic publishers, as well as art outside of comics. What made you decide to start a webcomic on your own?
When the economy tanked in ’08 I didn’t have much work coming in so I was bored and just decided to do something for free that I could give away on my blog. So, Los Angeles Ink Stains was born.

Do you think of webcomics as a sort of minor leagues for the industry, or does it stand on its own as a medium?
It stands on it’s own. There’s some amazing stuff going on in the webcomics scene. It’s a really cool option for those that can’t get published. And the whole print vs. digital thing that’s going on now anyway is pretty weird. We’re in a transitional phase of sorts.

Los Angeles Ink Stains is being collected and published by Image. Did you plan on collecting it into a physical book from the start? If not, what was your ultimate plan for the comic?
I had no plans to make it into a book. It was strictly a free thing on my blog. I just wanted to do at least one strip per week, put it up, and let people read it and enjoy it. But then it wound up getting the biggest reaction out of people….more so than any other comic project I have ever been involved in. Tons of people started commenting on it and emailing me and everyone was demanding a book. I knew it would take awhile. It took three years worth of material, plus a bunch of cool bonus stuff, to make the book.

Is the current system of “put out a ton of comics, and hope someone collects it,” sustainable?
I don’t know. I don’t really think in those terms. Each project is always different and might demand a special type of presentation or format. I still like the thin, 32 page monthly comics, I like graphic novels, I like hard covers, I like the digital webcomics. It’s all good.

What do you think the future of webcomics is?
I’m not qualified to say but I hope the diversity and the experimentation continues. There’s some rad stuff out there.

What was your best experience publishing webcomics?
For the Los Angeles Ink Stains book, I collected photos from all my amazing friends that are photographers. My homie and the designer of the book, Jane Dope, made all these kickass collage pages out of the photos. And then in the back of the book we have a “yearbook” sort of thing where we have about 250 photos of almost every single person who has ever appeared in the strip. And the photo of them is next to a little drawing of them. So, you can see what they look like in real life and you can see what they look like in the “Ink Stains” style. It came out so awesome. This collection is the best book I have ever put out, hands down.

What was your worst?
There were all these little technical issues to deal with in the making of the book, especially with the above-mentioned photos. Tracking down photos of 250 different people is not an easy thing to do!

Is there anything I missed that you want to talk about?
Los Angeles Ink Stains Vol. 1 drops on May 23rd, 2012 from Image Comics. The Release Party is an actual Prom that will be held at Titmouse Animation Studios the night of June 16. It’s going to be an over the top celebration… with music, dancing, partying, booze, the whole cast from the book will be there, I’ll be on hand to sign everyone’s books….it’s going to be an amazing night! 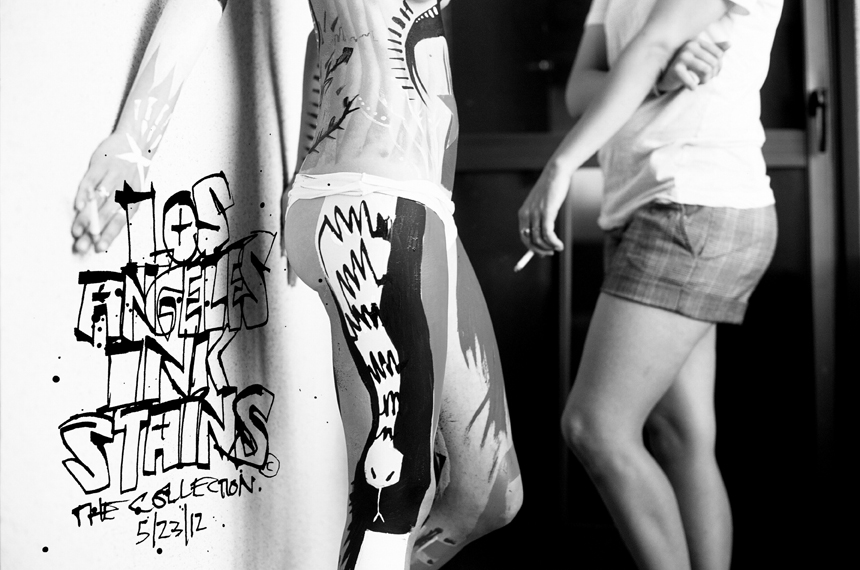 VIEW THE COMPLETE ARCHIVE OF